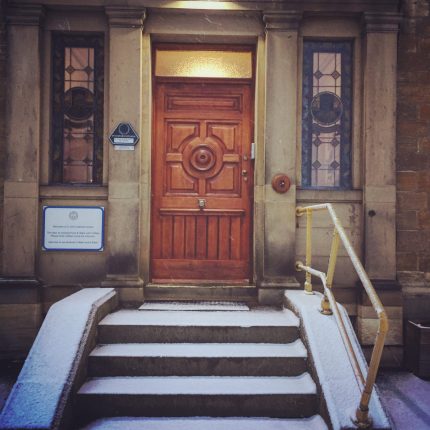 In June 1870 St John’s Catholic School for the Deaf was founded in Handsworth, Sheffield by Monsignor Desire de Haerne, a Catholic Priest from Belgium.  Monsignor de Haerne was the Head of the Royal Deaf and Dumb Institute in Belgium and he travelled the world extensively, promoting education for deaf children.  He had visited England in 1869, and had been concerned by the small number of institutions providing education for deaf children in comparison to the provision in other European countries.  In particular he was concerned that there was no specific education for deaf Catholic children, with many of them being educated in non-Catholic asylums or receiving no education at all.

When he returned to Belgium in December 1869, Monsignor de Haerne brought with him two English deaf girls, to educate at his school in Brussels.  The girls were under the tuition of Miss Lydia Edwards, who was to train as a teacher of articulation at the Royal Institute in Belgium.  The following year, with the support of the Catholic Church in England, Monsignor de Haerne opened St John’s Institution for the Deaf and Dumb, a Catholic school which would also accept pupils of other denominations. The two girls who had gone to Belgium, Catherine Mooney and Joanna Connell, became the first pupils with Miss Edwards as the Directress.  As well as providing a Catholic education, the other objective was to teach them household work and to prepare them for trades, the ultimate aim being that, having attended St John’s, they would leave school able to find employment and to take their place in society.

The new school was to be based in Sheffield, as the Sheffield Union had paid the school fees for one of the girls when they went to Brussels, and Sheffield was considered to be a central point in England and Scotland.  The school, which was an oral school, was named after St John of Beverley who, legend has it, taught a deaf and dumb boy to speak.  Many deaf schools around the world share this name for the same reason, although they have no connection to St John’s in Boston Spa.

By September 1870 the school had six pupils, prompting Monsignor de Haerne to approach the Daughters of Charity of the Order of St Vincent de Paul, with whom he already worked in Brussels, to take over its running and administration.  Some of the Daughters of Charity had trained under his guidance, and four of them moved to England to run the school, with a number of them taking up vocations as teachers of the deaf.  They brought five orphans with them and the school continued to grow until, by the end of 1874, the school in Handsworth, which was a rented cottage designed for 12, accommodated 41 pupils.  Monsignor de Haerne approached the Bishop of Leeds for help in finding larger premises, and a house was found which had formerly been a school for gentlemen’s sons.  Collections and legacies enabled Monsignor de Haerne to buy Boston Spa College, and the school moved from Sheffield to its present site in Boston Spa in 1875.

The school grew and flourished and new buildings were added, including the Chapel, which was opened in 1889.  At its peak, the school was home to two hundred and six children, many of whom were orphans and lived permanently at the school.   The original aim of equipping pupils with the skills needed to enable them to find work continued.  Areas of the newly extended school were used as workshops, where the boys learned tailoring, shoemaking, carpentry, bookbinding and printing, whilst the girls learned cookery and household work, gardening, needlework and later, typing.  The school kept records of the jobs pupils obtained after leaving St John’s, together with the amount of wages they were paid.  In 1902 the school rented a house in Redcar as a holiday base for the children, in order that they could benefit from a change of scenery and be in different surroundings.  They went in groups and it was noted that the children returned from these trips, healthy and invigorated.   The house, St John’s Lodge, at 39-41 Henry Street was used as a holiday home in the summer, with the boys in one side and the girls in another.  At other times of the year it was used as a sanatorium for the treatment of invalids and those convalescing after an illness. It was eventually purchased by the school in 1914 for the sum of £980.

As education developed in England, St John’s also developed and changed.  Pioneering members of staff moved the school from a vocational institute to an international centre of intellectual achievement where extraordinary numbers of deaf students moved on to higher education and university.  Sister Barbara Walsh introduced formal examinations to the school in 1958, when four students took GCE examinations for the first time.  She went on to become Headmistress, and stayed at St John’s for 32 years until her retirement in 1982. Sister Barbara received an OBE for her services to deaf education, and the Daughters of Charity of the Order of St Vincent de Paul continued to work the pupils at St John’s until 1998.  When they left, a stained glass window was commissioned for the Chapel corridor to commemorate the 128 years the sisters had been associated with St John’s. 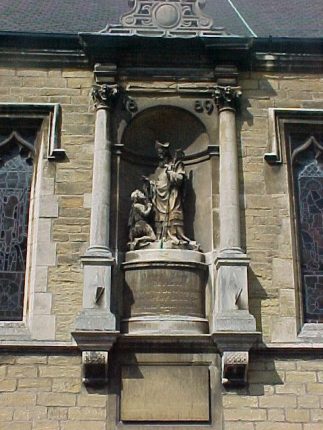 Improving technology has also had a significant impact on raising academic achievement.  Initially pupils wore individual hearing aids, and a group hearing aid system was developed by the school for use in the classrooms.  From the very beginning, the school has had a philosophy of developing pupils’ spoken communication skills, and the strong emphasis on speech was reinforced by the introduction of speech and language therapy.  The development of cochlear implants has enabled a dramatic advance in pupils’ language acquisition, and in 1989 one of our pupils was the first child in the UK to receive a cochlear implant.

Advances in technology combined with a strong ethos of care, have fulfilled the vision of Monsignor de Haerne to provide a quality education for children whose deafness saw them being rejected and left behind, and has established him as an innovator in the field of education. The school today is not so very different from the school of 1870, in that it still has at its heart, both the education and welfare of the pupils.