We are always delighted to hear from our past pupils and to find out what they have been doing since leaving St John’s.

So, please get in touch with your news and send us your photographs so we can feature you on our website!  You can email photographs and news to : info@stjohns.org.uk

Charlotte Butterwick (above, centre) graduated and is now working for Marks and Spencer as a Management Trainee. 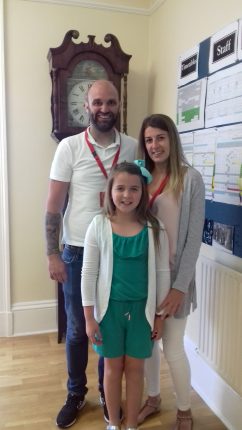 After completing courses at York College in 2002 including carpentry and tiling, Liam now works at East Lancashire Deaf Service as a Maintenance Team Leader.

At the beginning of February 2018, some past pupils paid a visit to St John’s (pictured above from left to right) : Jack Sturdy, Andrew Udall, Rebecca Farquhar, Richard Beattie, Donna Cross, Charlotte Wayt (Mrs Baldwin in the middle!)

Jack is married to Charlotte (past pupil) and they have a little girl. 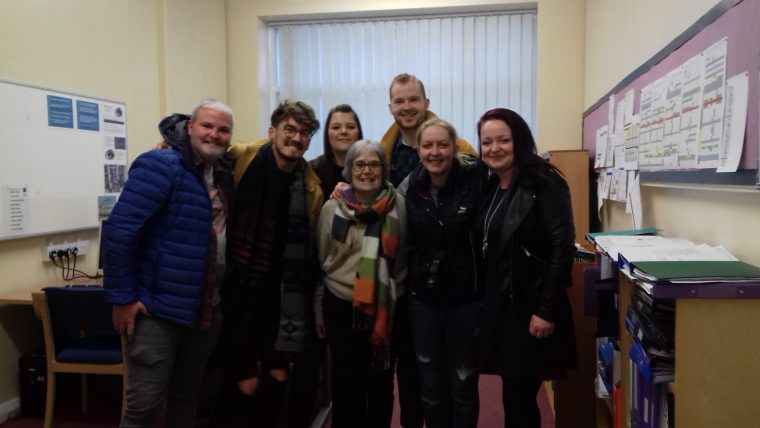 Andrew lives in Matlock and he is a Creative Director at a hairdressers.

Rebecca lives in Skipton – she has a 4 year old daughter

Donna lives in Leeds. She has 2 children and runs her own mobile dog grooming business

Charlotte has a BA in Childhood Studies. She has 3 children and works with Deaf/blind children in Scotland.

In February 2017, past pupils Chloe Lockey and Adam Summerscales visited St John’s to talk to our year 10 and year 11 students about their lives since leaving St John’s and the careers they are now following. The students found the presentations both inspiring and informative.  Chloe and Adam are really positive role models and should be proud of their achievements.

In 2009, Chloe represented Great Britain’s Deaf Women Football team at the Deaflympics in Taiwan and in 2013 in Sofia, Bulgaria, where her team won a Bronze medal, which Chloe described as ‘the highlight of her life’.

In 2010, she represented the Football Association’s England Deaf ladies in Switzerland.

Chloe began working for West Yorkshire Police in 2015 as a Business Support Assistant where she received the Head of Department commendation award thanking her and her team for their hard work. She became a Deaf Champion for West Yorkshire Police to encourage the Deaf community to work with the police.  Deaf people can speak to Chloe about any concerns they have, ask advice or questions.

After successfully completing 5 GCSE’s, Adam joined the St John’s sixth form department. He initially enrolled on an IT course but decided to change to a National Diploma in Print Based Media. In his third year at college, Adam was offered the opportunity to do a Photography course alongside his Print Based Media course.

Adam left St John’s in 2012. He went on to study a 3 year course in Photography at Huddersfield University where he achieved a BA Hon Photography degree. Last year he was studying for a Masters Degree in Digital Media.

In October 2016, Adam exhibited some of his work in an exhibition called ‘Human Forest’ in the Winter Gallery Show at Dean Clough Mill, Halifax. Adam said ‘the project highlighted the feeling of frustration and the sense of invisibility a disabled person might feel when navigating through city streets.  The exhibition is an invitation to see the streets from the perspective of a disabled person’.

Adam is now at York College on placement from Huddersfield University, where he is doing his PGCE (The Postgraduate Certificate in Education (PGCE/PGCertEd)). He will be at York College until the end of the academic year, teaching A level photography and level 2 creative media. Congratulations Adam. 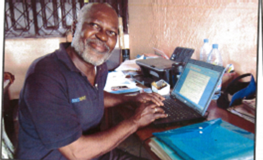 Margaret Lloyd Bibum pictured above, became deaf at the age of two following measles. At the age of six she came to St John’s as a boarder.  By 17 she had passed her GCE O’ and A’ Levels but three universities denied her a place because of her deafness. Sister Barbara Walsh, the Headmistress encouraged her to train as a teacher.  She did her Certificate in Education and returned to St John’s to teach and continue in-service training to obtain her Diploma in Deaf Education.

N’jok Bibum Aloysius became deaf at the age of six following a fever.  He won a scholarship from the Prime Minister of West Cameroon to come to England to St John’s as a boarder where he met Margaret.  He passed his GCE O’ and A’ Levels before moving to Hull Polytechnic to do a HND in Business Studies.

Aloy and Margaret married in 1976 and both of them studied and worked in the US before returning to Cameroon in 1996 where they founded Buea School for the Deaf, where they both still teach. 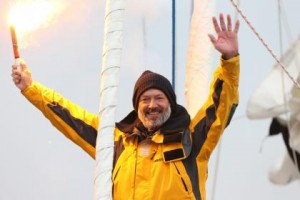 Gerry Hughes attended St John’s in the 1970’s from the age of 13 to 16.  He overcame his struggle to read and write at the age of 15 and went on to sixth form college, later graduating with a degree  in Mathematics from the Open University.  Gerry became a teacher and worked at Donaldson’s school for the deaf in Scotland.  He is best known for his achievement as the first profoundly deaf yachtsman to sail single handed across the Atlantic, and to sail around the world passing all of  the five great capes. Gerry now does motivational speaking and talks of how he used to gaze at the stars out of the window at night, from his bedroom at St John’s, and how from the age of 14 he had a dream of sailing l around the world. 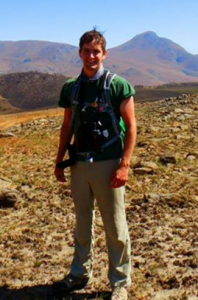 Past pupil Liam McCreesh now works at St John’s as a Learning Support Assistant and is profoundly deaf.  Liam and his brother both attended St John’s until the age of 7 before returning to mainstream education.  Liam graduated from Leeds University in 2013 with a MSc in Environmental Management and Engineering, and has travelled extensively including time in India with Operation Raleigh where he was involved in constructing the country’s first water gravity feed system without the aid of machinery. Liam gave an inspiring presentation to our parents at our information day, about  his time as a youngster at St John’s, and told the audience  “I see myself  becoming an outdoor activities leader taking young people on life affirming expeditions across the world.”  Liam is a great role model for our students.

Roisin Gray (nee McBride) visited school and greatly enjoyed looking around  and catching up with members of staff who had taught her and remarked on the many changes that had taken place since she had left.

Roisin spoke to our year 11 pupils in their Careers lesson about the jobs she had done after leaving school and college and how she is now a support worker in a residential school for autistic children with challenging behaviour and studying for a GNVQ Level 4 qualification.

The photographs show Roisin and a few other St John’s past pupils when they were here and more recently at a reunion in Leeds. Here’s what they’re all doing:

Bernadette Reed is working as a design officer for Kirklees Council and the museums nearby. Naveed Ahmed is working as an architect in London. Issy Cosgrove is a Connexions Adviser (Tracking) for the Young People’s Service in the City of York Stephen Collins is working as a Systems Administrator for a bank Gloria Peinado is working as a teaching assistant for the school of the deaf in St Albans.